It was a hazy harmattan morning in January 1958.

It was a hazy harmattan morning in January 1958. I was excited. I had hardly slept the previous night. That was my first day at School – Ishan Grammar School, Ubierumu Village. And I went to school in a grand style. The very Rev. Father Matthew Walsh, who had taken me in for more than a year as a “house boy”, had told me the previous day that he would take me to school the next day and personally hand me over to his very bosom friend, Rev. Father James Byrne, the pioneer Principal of Ishan Grammar School.

I was smartly dressed in my new, neatly ironed school uniform. For me, it was a joyful ride to school … a distance of about four miles, from the Rev. Father’s quarters, down-town Uromi. My expectations were high and excitable. Soon, we arrived at the School Gate and drove through the narrow passage to the expansive School Compound. I was overwhelmed with joy and raping to go! As the car stopped, I jumped out of it and stood smartly beside Rev. Father Walsh who stretched out his right hand to me. I clutched the hand warmly like the trustful child with a loving father. Together, we walked into the warm embrace of Rev. Fr. Byrne.

It did not take too long to adjust and settle down as a secondary school student. After the grand car ride on the first day at school, I fell back to riding a bicycle to school every morning after serving at Mass in Fr. Walsh’s House Chapel. I was settled into the school’s routine early enough, thanks to my primary school class-mates such as Andrew Masade (aka Cantab) and Anthony Okpere who were there a year before me. They made me feel at home.

Quite so soon, teaching and learning had started, and at a much faster pace of the college “tutors”, as compared to the “teachers” of a primary school. Indeed, it must be said that our tutors of those days were dedicated and gave us of their best. Although, most of them were non-university graduates, they grounded us very solidly in all the school subjects. That foundation was complemented by a sound moral upbringing which has guided most of my contemporaries in both their private and public conduct till date.

In addition to the academic and moral training, sports was also very much emphasized in those days. Football then was already very popular. Friendly matches and athletic competitions among schools were frequent, and they brought a lot of excitement among students’ participants and cheer-leaders alike. We, the “day boys” as day students were called those days were not left out, which reminds me of how, in our enthusiasm to attend one of the inter-school football matches, I earned my first and only suspension from school.

For some days, the build-up to … the friendly football march between our school and ACC, Irrua had reached fever pitch. As usual, “day boys” had no space in the hired lorry that conveyed the footballers and boarders to the venue of competitions. But this time around, however, we were prepared to challenge this patent discriminatory policy of the school.

On the fateful day, the lorry was stationed in the football field, ready for departure to the match venue at Irrua. A good number of us, day students, had gathered at the school gate, as previously agreed. I then led the motley crowd through the narrow drive into the school compound. And there, standing beside the hired lorry, was the then Vice Principal, Rev. Father John Casey, with whom I lived in Rev. Father Walsh’s abode at Uromi. He was supervising the boarding of the boarders into the lorry.

Drawing his attention, I demanded calmly, “Father, I would like day boys to join the lorry to ACC. We are also interested in watching the football match.” He then replied, “Julius, day students cannot join the lorry., the lorry cannot take everybody.”

I retorted, “This is discriminatory and prejudicial to the day boys. Day boys also pay games fees, from which fund this lorry was hired by school!” Rev. Father Casey then erupted, “Julius! Julius, you mean we are discriminatory? Do you know what you are saying? Do you know what that means?” he fumed as he added, “I will report this to principal when he comes back. Now, get out of the school compound.”

Utterly disappointed and dejected, I led my crestfallen troops out of the school compound, back to our respective homes. Yet, at home, all alone and ruminating on the day’s encounter, I felt a warm sense of satisfaction. For one, I had become a cult here among my fellow day students who profusely praised me for boldly confronting the Vice Principal.

More importantly, I secretly swelled with the proverbial self-praise of the lizard that I had the opportunity to show off to my school-mates the new vocabulary I had recently acquired the words “discriminatory and prejudicial!” It was a common practice in those day to flaunt any new big words one had just learnt!

This incident happened in 1961 when the Nigerian press was awash with reports of abuse of human rights and racial prejudice by whites against the blacks in apartheid South Africa and the United States of America. I was actually only peripherally conscious of the deep implications of such current affairs soon after Nigeria’s national independence from our colonial masters!

That weekend passed quietly at home without any further event. But it proved to be the proverbial quiet before the storm! The first sign of trouble the following Monday at school was a call that I should report in the principal’s office immediately after the morning assembly. That was a very bad omen because it was the tenure of the young and dynamic new principal, the Rev. Fr. John Dunne, who had taken over from the saintly Rev. Fr. James Byrne at the end of 1959.

When I stood before him, Rev. Fr. Dunne neither wasted time nor minced his words. For accusing the school authority of discrimination and prejudice, I had to leave the school. For him, my accusation was not only grave but completely unfounded. He immediately gave me a letter of suspension for two weeks.

I left the principal’s office, speechless. I then went into the classroom to pick up my school bag and, thereafter, mounted my bicycle and rode despondently home. I was in shock and disbelief, and indeed out of my depth neither understanding the perceived seriousness of my conduct nor the necessity of the severe punishment arising from it. After all, I was just “blowing” grammar on that fateful day to show off my new stock of bombastic vocabulary!

However, years later and wiser, I realized the explosive context of my statement, considering that at the time, issues of discrimination and racism raised the hackles internationally and especially in Africa, where the racial policy of apartheid in South Africa promoted white supremacy over blacks in their own fatherland.

So our white school principal and his Vice Principal did not see themselves in that light and they could not have stomached my blatant accusation, especially because they were dedicated missionaries who loved their young African charges!

However, true to the charitable disposition of early missionaries in Nigeria, my suspension was short-lived. As I walked along a street in the area known as “Garage” at Uromi, Rev. Father Dunne spotted me on his drive to the next town and stopped. He was apparently in a happy mood with his favourite long pipe jauntily displayed in his mouth. He waved me over and I ran up eagerly to him. He asked, “Juliius, what are you doing on the street?” and before I could answer, he pronounced “come back to school tomorrow, ok?”. With bated breath, I answered, “Yes Father, thank you Father.” And he promptly drove off toward Ubiaja! I was overwhelmed with joy! Thus, my crossed swords with the Vice Principal, my intemperate utterance, which was clearly an exhibition of youthful exuberance, and the traumatic consequence, came to a very pleasant end – after all!

More pleasant things happened to me thereafter. When I returned to school the following day, I reported my good fortune to my classmates following my encounter with the Principal the previous day and everyone rejoiced at my restoration, particularly all the “day boys” who still saw me as a hero.

Until I graduated from the school in 1963, I became the unofficial “prefect” and spokesman of all the “day boys”, a position in which I collaborated very well with the then Senior Prefect of the School, F.D. Okoh, alias FODO. It is with nostalgia I recall my golden six years in Ishan Grammar School.

I remember my colourful teachers; Mr. O.S.B. OMOREGIE (aka, “Ayambus”), the Literature Master; the Biology Master, Mr. Akumabor (who began every lesson with the sing-song “Biology is the study of …”); Mr. Isichie, Maths Master (aka, “Angle A.B.C…”); Mr. Umeh, History Master (aka, “The hundred years war …”); Late Mr. Agun, Chemistry Master (aka, “who can have go?”); Mr. & Mrs. Menser and a host of other Masters who gave us the solid foundation that saw us successfully through our Secondary School Education. We are proud and grateful to all of them.

I was President of the Association from 1977 to 1991 when the mantle of leadership fell on Dr. A.A. Ihenyen. It was a remarkable experience. During my presidency, the Association successfully celebrated our School’s Silver Jubilee in October 1981. During the celebration, Andrew Masade hopped into a plane in Lagos to bring Rev. Fr. Byrne down from Liberia to attend the ceremonies. Rev. Fr. Dunne also came over from Isse-Uku where he mentored the then young Bishop Gbuji. Also present was the thhen civilian Governor of Bendel State, Prof. Ambrose Alli, and a host of other dignitaries.

Once more, I give thanks to all our Principals and Teachers who saw us through our alma mater. We came into School, innocent adolescents, but through their instrumentality, we completed our studies full of knowledge and high ideals, ready to conquer the world.

I, particularly, will ever be grateful to my foster father, Rev. Fr. Matthew Walsh, who enrolled me in Ishan Grammar School at a most vulnerable period of my life. When I lost my father on 12th June 1957, all hope of advancing my education beyond primary school seemed lost.

I give honour and glory to Almighty God for sparing my life to be part of the preparation and celebration of the Golden Jubilee of our great Alma Mater. To Him be the Glory, forever!

Finally, when I review my life … from “house boy” to “day boy”, from the unofficial “Prefect” of the “day boys” to the First National President of Esan Grammar School Old Boys Association, I cannot but affirm that mine has indeed been a spectacular journey through life! 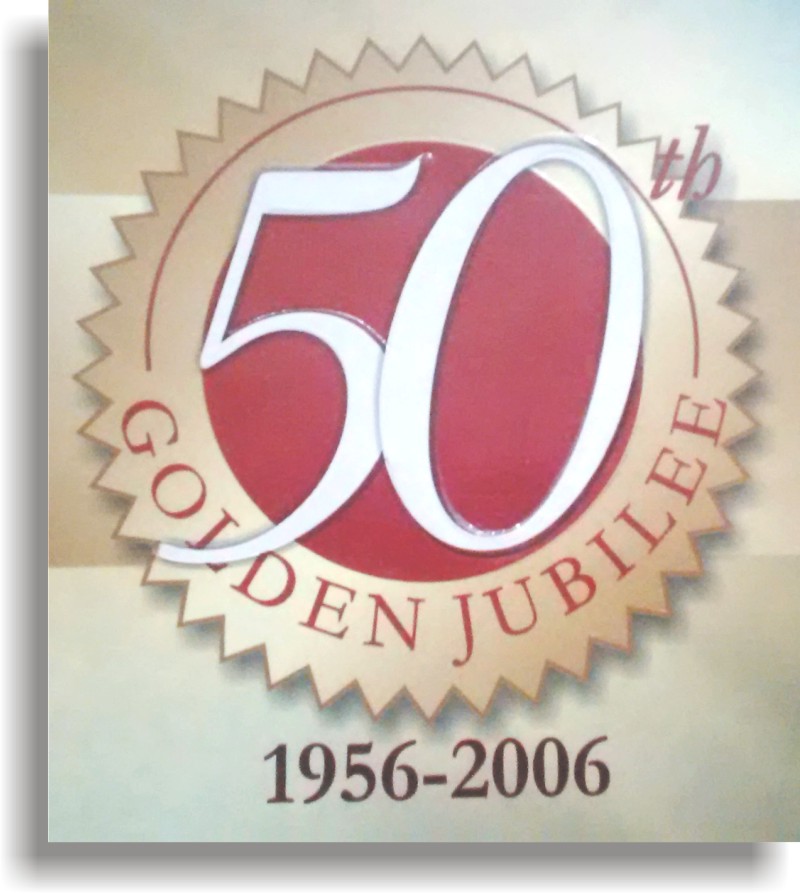